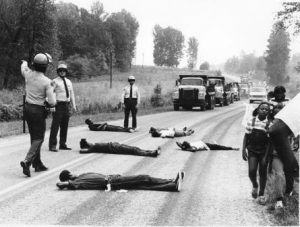 In 1979, residents formed Warren County Citizens Concerned About PCBs to fight the siting and construction of the landfill. Residents held rallies and protests of the landfill. The first truckload of soil that arrived at the landfill in September 1982 was met by 400 to 500 protesters.

State highway patrol arrested 55 people on the first day, but the protests continued for the next six weeks while the soil arrived. During this time 523 arrests were made, including juveniles, senior citizens, and U.S. Congressman Walter Fauntroy.

“I walked to the landfill . . . with my mom. And when havoc started, we got separated.

“And I was just screaming, ‘Don’t bring the trucks in. I don’t want to die from cancer.’

A week after the last truckloads of contaminated soil arrived at the landfill, Governor James Hunt promised to detoxify the landfill when the technology became available. The landfill was capped in late November 1982.

Three months later, gas from decomposing vegetation in the landfill caused bubbles in the liner and gurgling sounds. The liner was vented, and the state proposed a drainage system to remove the water.