Two different groups of residents from Holly Springs communities organized their communities and brought lawsuits to block the proposed landfill. Jerry Franks, a resident of Easton Acres (a predominantly Black community close to the proposed landfill site), went door to door to inform community members of the plan to build the new landfill. In addition, Residents Against the Landfill (RAL), a group with many newer residents of Holly Springs, also began protesting the landfill’s placement in Holly Springs. 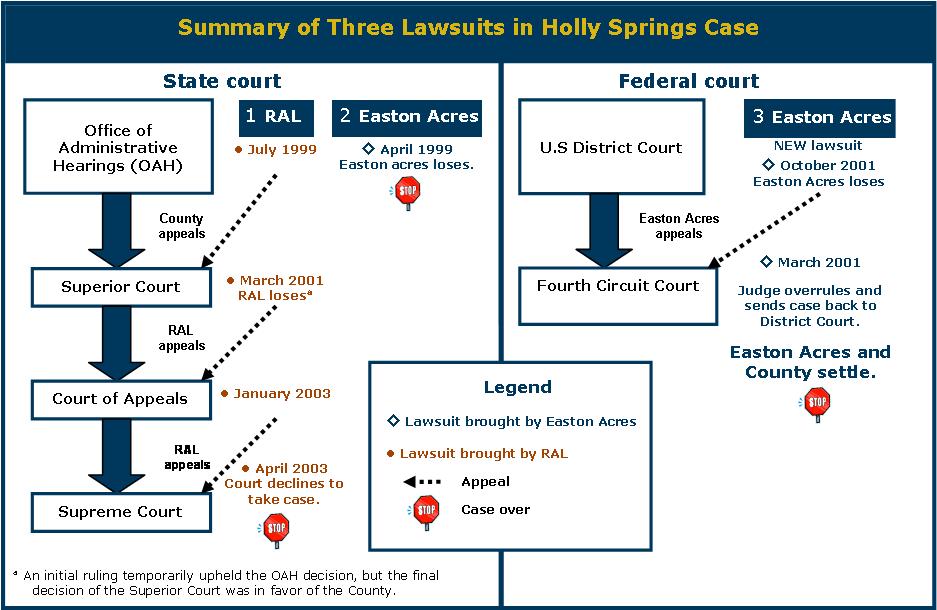 RAL Lawsuit. A Holly Springs resident who was also an attorney filed an appeal in state court on behalf of RAL for 60 residents. The group claimed that Wake County misrepresented the new landfill as an expansion of an existing landfill and that a former commissioner benefited from the sale of land for the landfill, violating state law. The appeal also claimed that the county violated a North Carolina statute because the proposed landfill was within one mile of an existing landfill, yet there had been no public hearing or demographic assessment. The judge ruled that the permit for the landfill was illegal because Wake County did not fulfill the required procedures. After several rulings, a Superior Court judge ruled in March 2001 that DENR should reissue a permit to Wake County for the landfill, and DENR complied one week later.

Residents took the case to the State Court of Appeals, but in 2003, the court upheld the county’s right to build the landfill. The Holly Springs Board of Commissioners petitioned the State Supreme Court for review, but the court declined to review the previous court’s ruling. This meant the end of RAL’s attempt to block the landfill with a lawsuit. Wake County was allowed to build the new landfill in Holly Springs.

Easton Acres Lawsuit. On the same day that RAL began its lawsuit in 1999, Jerry Franks filed a state appeal of the permit for the landfill and asked the state to stop the landfill construction. The appeal was based on the lack of socio-demographic studies, investigations of alternative sites, and public hearings prior to the selection or approval of a landfill site that is within one mile of another landfill. The same judge that ruled in favor of RAL refused to stop the landfill construction.

Between 2000 and 2003, Franks, along with LaVerne Cofield and the Easton Acres Residents Association, filed a federal case against Wake County, the Wake County Board of Commissioners, and the state Department of Environment and Natural Resources (DENR). When they lost in district court, residents took the case to the Fourth Circuit Court of Appeals, where the judge overruled the previous decision and sent the case back to the District Court.

The settlement became effective in 2003. In 2006, Wake County Commissioners voted to move forward with the new landfill, as per the settlement agreement. The landfill is scheduled to open in late 2007 and expected to remain open for 25 years.

“We’re a small group of people who have been trying to deal with a county. It’s been a very long, hard fight. But I still feel strongly. I would do it again.”